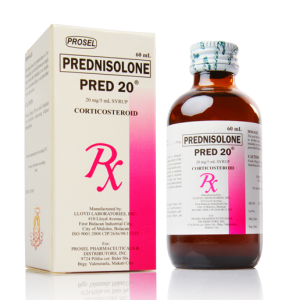 Prednisolone is a glucocortocoid given, as the free alcohol or in esterified form, orally or parenterally, in the treatment of various disorders in which corticosteroids are indicated, except adrenal deficiency states. Adverse effects are those of corticosteroids in general. It has relatively slight mineralocorticoid effects.

Prednisolone and prednisone are both readily absorbed from the gastrointestinal tract, but whereas prednisolone already exists in metabolically active form, prednisone must be converted in the liver to its active metabolite, prednisolone. In general, this conversion is so that prednisone has a preconversion biological half-life of only about 60 minutes. Hence, although prednisone has been estimated to have only about 80% the bioavailability of prednisolone, this difference is of little consequence when seen in the light of inter-subject variation in the pharmacokinetics of prednisolone itself: bioavailability also depends on the dissolution rates of the tablet formulations. Nevertheless, prednisolone is the more reliably absorbed of the two corticosteroids, particularly in some liver diseases where the conversion of prednisone may be diminshed. Peak plasma concentrations of prednisolone are obtained 1 to 2 hours after administration by mouth, and its plasma half-life is 2 to 4 hours. Its initial absorption, but not its overall bioavailability, is affected by food. Prednisolone is extensively bound to plasma proteins, although less so than hydrocortisone (cortisol).
Predisolone is excreted in the urine as free and conjugated metabolities, together with an appreciable proportion of unchaged prednisolone. Prednisolone crosses the placenta and small amounts are excreted in the breast milk.

Prednisolone is excreted in the urine as free and conjugated metabolitites, together with an appreciable proportion of unchanged prednisolone. Prednisolone crosses the placenta and small amounts are excreted in breast milk.

Prednisolone has a biological half-life lasting several hours, intermediate between those of hydrocortisone (cortisol) and the longer acting glucocorticoids such as dexamethasone. It is this intermediate duration of action which makes it suitable for the alternate-day administration regimens which has been found to reduce the risk of adrenocortical insufficiency, yet provide adequate corticosteroid coverage in some disorders.

Large doses of corticosteroids, or of corticotropin may produce Cushingold symtoms typical of hyperactivity of the adrenal cortex, with moon face sometimes with hirsutism, bufallo hump, flushing, increased bruising, ecchymoses, striae, and acne, sometimes leading to a fully developed Cushing’s syndrome. If administration is discontinued these symtoms are usually reversed, but sudden cessation is dangerous.