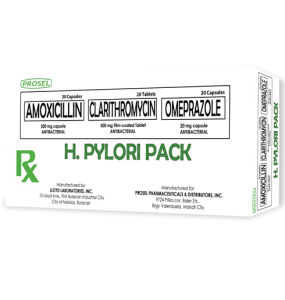 Amoxicillin:
Amoxicillin (Promox ®)is a semi-synthetic penicillin a close chemical and a pharmacological relative of ampicillin. The drug is stable in acid and is designed for oral use. The antimicrobial spectrum of amoxicillin is essentially identical to that of ampicillin with the important exception that amoxicillin appears to be less effective than ampicillin in shigellosis.

Clarithromycin:
Clarithromycin (Klaxid) is a macrolide derived from erythromycin with similar actions and uses. It is given in the treatment of respiratory tract infections (including otitis media) and in skin and soft-tissue infections.

Omeprazole:
Omeprazole (Omezid ®) is proton pump inhibitor. Its active ingredient is a sustituted benzimidazole. 5-methoxy-2[[(4- methoxy-3,5- dimethyl-2-pyridinyl) methyl] sulfinyl]-1H-benzimidazole, a compound that inhibits gastric acid secretion. Inhibition is done by irreversibly blocking the enzyme system of hydrogen/potassium adenosine triphosphatase (H+/K+ATPase), the “proton pump” of the gastric parietal cell. It is used in conditions where inhibition of the gastric acid secretion may be beneficial, including aspiration syndromes, dyspepsia, gastro-esophageal reflux disease, peptic ulcer disease and the Zollinger-Ellison syndrome.

Amoxicillin:
Amoxicillin (Promox ®) is more rapidly and completely absorbed from the gastrointestinal tract than ampicillin. Peak plasma concentrations are 2 1/2 times greater fro amoxicillin than for ampicillin after oral administration of the same dose. Food does not interfere with absorption, perhaps because of more complete absorption of the congener.

Omeprazole:
Omeprazole (Omezid ®) is rapidly but variably absorbed following oral administration. Absorption is not affected by food. Omeprazole is acid-labile and pharmacokinetics may vary between the various formulations developed to improve oral bioavailability. The absorption of omeprazole also appears to be dose-dependent; increasing the dosage above 40mg has been reported to increase the plasma concentrations in a non-linear fashion because of saturable first-pass hepatic metabolism. In addition, absorption is higher after long-term administration. Bioavailability of omeprazole may be increased in elderly patients, in some ethnic groups such as Chinese, and in patients with impaired hepatic function, but is not makedly affected in patients with renal impairment. Following absorption, omeprazole is almost completely metabolized in the liver, primarily by the cytochrome P450 isoenzyme CYP2C19 to form hydroxyomeprazole, and to a small extent by CYP3A to form omeprazole sulfone. The metabolites are inactive and are excreted to be about 0.5 to 3 hours. Omeprazole is highly bound (about 95%) to plasma proteins.

This combination of Amoxicillin, Clarithromycin, and Omeprazole is widely used as a standard treatment for the eradication of Helicobacter pylori infection.

Amoxicillin:
Amoxicillin (Promox ®)is used individually for the treatment of infections caused by susceptible strains of Gram-positive and Gram-negative organism such as respiratory, gastrointestinal, and genitourinary tracts and soft tissue infections.

Omeprazole:
Omeprazole (Omezid ®) is used for the treatment and relief of acid-related dyspepsia, gastroesophageal reflux disease. NSAID-associated ulceration, Zollinger-Ellison syndrome and in the management of peptic ulcer disease. It is also used for the prophylaxis of acid aspiration during general anesthesia.

Amoxicillin:
Gastrointestinal disturbances and rashes may occur. Small amounts of amoxicillin excreted in the milk may provoke allergic reactions in breastfed infants.

Clarithromycin:
Gastrointestinal disturbances are the most frequent adverse effect but are usually mild and less frequent than with erythromycin. Taste disturbances, stomatitis, glossitis and tooth discoloration have occurred. Transient elevation of liver enzyme value, cholestatic, jaundice and hapatitis have been reported. Headache and rashes from mild skin eruption to, rarely, Steven-johnson syndrome have occured. There are also been reports of transient CNS effects such as anxiety, dizziness, insomnia, hallucinations and confusion. Hearing loss has been reported occasionally and is usually reversible. Other adverse effects include hypoglycaemia and thrombocytopenia. Interstitial nephritis and renal failure have been reported rarely.

Omeprazole:
Adverse effects reported most frequently with omeprazole have been headache, diarrhea, and skin rashes. They have sometimes been severe enough to require discontinuation of treatment. Other effects include pruritus, dizziness, fatigue, constipation, nausea and vomiting, flatulence, abdominal pain, arthralgia and myalgia, urticaria and dry mouth. Omeprazole may also increase the rish of gastrointestinal infections because of their acid suppressive effects.

Amoxicillin:
Amoxicillin is contraindicated patient known to be sensitive to penicillin and is should be used with caution in patients with known history of allergy to the drug.

Clarithromycin:
Caution is required in patients with impaired renal or hepatic function and doses should be reduced in those with severe renal impairment. It should not be used during pregnancy high dose have been associated with embryo toxicity in animal studies.

Omeprazole:
Before giving omeprazole to patients with gastric ulcers the possibility of malignancy should be considered since these drugs may mask symtoms and delay diagnosis. It should also be used with caution in hepatic impairment.