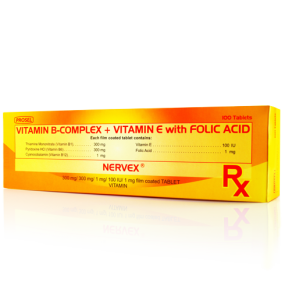 Each tablet contains a high potency formulation of the neurotropic vitamin B1, B6, B12 which is scientifically-based. This pharmacodynamic and neurotropic concentration of Thiamine, Pyridoxine and Cyanocobalamin precisely workds in providing etiologic and symptomatic therapy of painful neurological conditions.

Vitamin E, a fat-soluble vitamin, prevents the oxidation of polyunsaturated fatty acids. It reacts with free radicals, which are the cause of oxidative damage to all membranes, without the formation of another free radical in process.

Folic acid is a member of the Vitmain B group, Folic acid is reduced in the body to tetrahydrofolate, which is a coenzyme for various metabolic processes including the synthesis of purine and pyrimidine nucleotides, and hence on the synthesis of DNA: it is also involved in same amino-acid conversion, and in the formation and utilization of formate. Deficiency, which can result in megaloblastic anemia develops when the dietary intake is inadequate (as in malnutrition), when there is malabsorption (asin sprue), increased utilization (as in pregnancy or conditions such as hemolytic anemia), increased loss (as in hemodialysis), or as result of the administration of folate antagonist and other drugs that interfere with normal folate metabolism.

Vitamin B-complex is inidicated for the prevention and treatment of B1, B6, B12 deficiencies. Also, it aids in appetite stimulation and promotes proper metabolism of carbohydrates and proteins. It increases resistance to stress and meets nutritional needs for Vitamin B1, B6 and B12 of pregnant and lactating mothers, elderly persons and those on special diet.

Vitamin E is used in the treatment and prevention of Vitamin E deficiency.

Folic Acid is used in the treatment and prevention of folate deficiency state. It is also used in women of child-bearing potential and pregnant women to protect against neural tube defects in their offsping.

RECOMMENDED DOSE:
For the therapeutic use, 2-4 tablets may be given daily until acute symtoms subside. For chronic cases, longer therapy may be required and dosage may be adjusted upon physician’s recommendation. For prophylactic administration, 1-2 tablets daily is recommended or as prescribed by the physician.

The vitamins contained in Vitamin B Complex are completely non-toxic even in high doses and usually, no side effects occur. Sensitivity to Vitamin B1 however may sometimes be encountered if administration is at prolonged intervals, irregular, or if initial dose are low and suddenly increased. Liver dysfunctions could also predispose patients to hypersensitivity reactions. Nevertheless, it must be stressed that hypersensitivity to Vitamin B1 is very rare when orally given unlike if administered by intravenous injection where hypersensitivity is more often encountered.

Vitamin E is usually well tolerated. Large doses may cause diarrhea, abdominal pain and other gastrointestinal disturbances and have also been reported to cause fatigue and weakness.

This product contains FD & C yellow #5 (tartrazine) which may cause allergic type reactions (including brochial asthma) in certain susceptible persons.