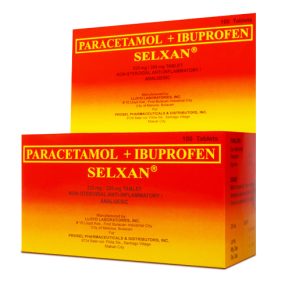 Paracetamol is used in the symptomatic management of pain and fever. Adverse effects include rashes, blood dyscrasias, and pancreatitis.

Ibuprofen is a non-steroidal anti-inflammatory agent used in painful inflammatory conditions. It is usually given 3 to 4 times daily. The main adverse effects are gastrointestinal disturbances.

The most frequent adverse effect occuring are gastrointestinal disturbances. Peptic Ulceration and gastrointestinal bleeding have been reported. Other side effects include dizziness, headache, skin rash, pruritus, edema, depression, drowsiness, insomnia, and blurred vision and other ocular reactions.

It is readily absorbed from the gastrointestinal tract with peak plasma concentrations occuring about 30 minutes to 2 hours after ingestion. It is metabolized in the liver and excreted in the urine mainly as the glucoronide and sulfate conjugates. Less than 5% is excreted unchanged as paracetamol and about 1% as ibuprofen and 14% as conjugated ibuprofen.

Individuals with syndromes of nasals polyps, history of angioedema & bronchospastic, reactivity to aspirin & other NSAIDS.

Paracetamol + Ibuprofen is indicated for the relief of mild to moderate pain of musculoskeletal origin such as myalgia, arthritis, dysmenorrhea, rheumatism, sprains bursitis, tenosynovitis backache & also for the relief of post-operative pain associated with tooth extraction & minor surgical operation.

Mild to moderate pain: 1 tablet every & hours
Moderate to serve pain: 2 tablets every 8 hours or as prescribed by the physician.

Storage at a temperatures not exceeding 30 degree Celsius.